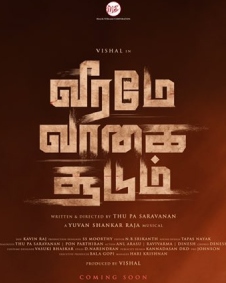 Vishal has finished shooting for his film with debutant Thu Pa Saravanan, and the film is titled as ‘Veeramae Vaagai Soodum’. The first look poster was launched a few days back on the actor’s birthday, and he was spotted holding a baseball bat in his hand. Vishal has again teamed up with a debutant director in his next film, and the film directed by Vinothkumar has started the shoot from today onwards. The makers have shared few pictures from the muhurat puja of the film that was held on August 29 on Vishal’s birthday

Sunaina plays the female lead, and it’s her second film with Vishal after ‘Samar’. The film is tentatively titled as ‘Vishal 32’ marking the actor’s career, and the film is jointly produced by Vishal’s friends and actors Ramana and Nandha under RANA productions. The shooting of the film is reportedly happening in Chennai, and the team has planned to move ahead gradually. Sam CS is scoring the music for the film, while the cinematography is handled by Balasubramanian.
Vishal has already finished shooting for ‘Enemy’ and ‘Veeramae Vaagai Soodum’, and the actor is working at a rapid pace to deliver back-to-back films