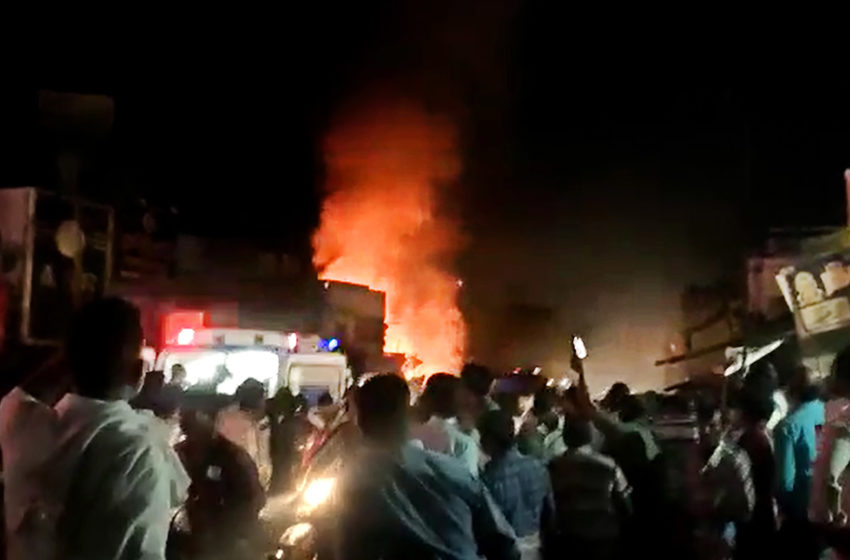 Kallakurichi: Five people were burnt to death in a fire that broke out at a firecracker shop in Sankarapuram area. In addition, more than 25 people have been admitted to Sankarapuram Kallakurichi Government Hospital with burns.

There is a firecracker shop owned by Murugan in Sankarapuram area of ​​Kallakurichi district. An unexpected fire broke out in the shop tonight and firecrackers exploded.
Thus the whole area was engulfed in flames. The fire continued to spread to nearby shops. Five people in the shops were burnt to death in the fire.

More than 25 firefighters who were working in nearby shops were rushed to the Sankarapuram Kallakurichi Government Hospital for treatment. More than 5 fire engines have been called in to put out the fire.
Due to this fire, the Sankarapuram area itself looks like a smoky zone. Villupuram District Superintendent of Police Ziaul Haq Kallakurichi District Collector Sridhar and officers rushed to the spot and are investigating.

The explosion took place at around 6.30 p.m. in the cracker shop. As flames engulfed the shop, the cracker bundles started exploding and the fire started spreading to a tea shop, bakery and a clothing store in the vicinity. Local residents heard a blast and saw smoke and flame engulfing the place.

Kallakurichi Collector P.N. Sridhar and Superintendent of Police Ziaul Haque visited the spot and held inquiries. The police said the exact reason for the fire would be known only after a detailed inspection of the site. Further investigations are on.