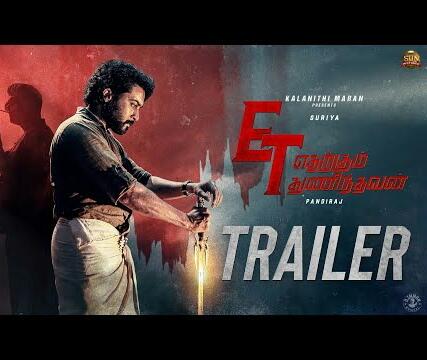 The makers of ‘Etharkkum Thunindhavan‘ have released the  trailer of the film and Suriya‘s rural entertainer is sure to keep the audience glued with its perfect blend of emotion and drama.

Movie is scheduled to release on March 10, and the film will be released in five languages namely, Tamil, Telugu, Malayalam, Kannada, and Hindi. The film is going to be Suriya’s first theatrical release in three years.

Director Pandiraj has given importance to all the main characters in the film, and it can be clearly witnessed through the trailer. After an extended cameo in the first film and a short cameo in the second, Suriya finally played the lead in his third film with Pandiraj.

Vinay has played the baddie, and he is expected to deliver big like his previous villain roles in ‘Thupparivalan’ and ‘Doctor’. D Imman has amazed the fans through his music in the trailer. ‘Etharkkum Thunindhavan’ is produced by Sun Pictures, and the film is preparing for a grand release.