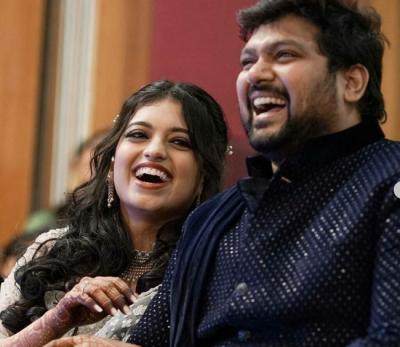 Renowned Telugu music director Mani Sharma’s son Swara Sagar Mahathi is reportedly all set to get married. He will tie the knot with singer Sanjana Kalamanje soon. The wedding ceremony will be reportedly held on October 24 in Chennai.

Recently, Mahathi and Sanjana got engaged in Hyderabad in an intimate ceremony. The low-key ceremony, which was held on Tuesday, only had close friends and family in attendance. The engagement pictures are currently going viral on social media.

Sanjana is one of the best-known voices behind many songs in Telugu, Tamil, and Kannada. She came into the limelight after singing the song “Natta Nadu Iravula” in Kaaval. Ever since there was no looking back for the singer. Recently, she has sung the song ‘’Hey Chusa’’ in Nithiin starrer Bheeshma, which has music by Swara Sagar Mahathi.

While on the other hand, Sagar forayed into the Telugu film industry in 2015 with a romantic action flick titled ‘Jadoogadu’. In 2018, he composed music for Venky Kudamala’s action-comedy Chalo, starring Naga Shaurya and Rashmika Mandanna in the lead roles. Sagar will be reportedly making his Kannada debut as a music composer soon. Sagar has also composed music for movies like Naga Shaurya’s ‘Nartanasala’ (2018), ‘Bheeshma (2020), and Ishq (2021).