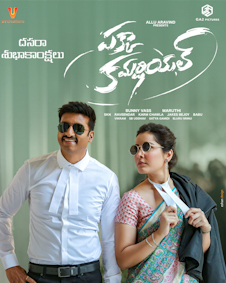 The film industry is buzzing with excitement as South superstar Gopichand finally announced the teaser drop of his upcoming action entertainer Pakka Commercial. Sporting a massy look, the teaser provided a glimpse into his assertive yet quirky personality as he chased off the baddies. Actor Raashii Khanna also charmed the netizens with her ability to carry out an eccentric and witty role.

Taking to his Instagram on November 8, the 42-year-old actor unveiled the teaser of his forthcoming action drama Paka Commercial by sharing a new poster. In the poster, the actor can be seen sporting a charming look and holding a playful smile. He shared the poster with the caption, ”Here it is, Presenting the teaser of my next film with @maruthi_official #PakkaCommercial, Hope you all like it!

Holding true to the name of the movie, the teaser of Gopichand’s Paka Commercial starts off with the actor fighting off the bad guys in his usual stylish manner. Along with the hand-to-hand combat, the audience can expect high octane stunt and action sequences including umbrella, Golf club and more. Not only does the actor revealed a broody persona in the film but also treats his fans with entertainment as he dons a comical role in the second half of the teaser.

Netizens also got a look into Raashii Khanna‘s witty character who seems to be playing the role of a lawyer. Fans are now excited to watch her blatant and straight forward personality going against Gopichand’s pensive yet quirky character.

The teaser was thoroughly enjoyed by several as they spammed the comment section with fire and heart emojis to show their appreciation. Many also appreciated the actor’s powerful dialogues and action sequences. It was evident by the comment section that the teaser has charged the excitement for the release of the film.

Directed by Maruthi, the movie is bankrolled by UV Creations and GA2 Pictures. The film will reunite Gopichand and Raashii Khanna for the third time along with a second collaboration between Maruthi and Khanna. To be released in theatres, the makers are yet to announce an official release date for the film.