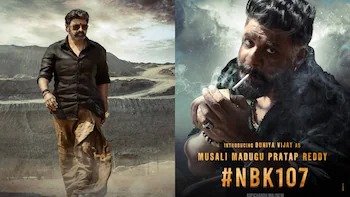 #NBK107 is directed by Gopichand Malineni starring Balakrishna and Shruti Haasan in leadrole. The yet-to-be-titled #NBK107 is an intense commercial and mass entertainer that is currently being shot in Hyderabad with the lead cast.

The filmmakers released Duniya’s first look which sees him in an intense and powerful avatar. His look hints at the kind of role he plays in the film and sources state that he has already begun shooting for his part.

Tamil actress Varalaxmi Sarathkumar has also been roped in to play a key role in the high-octane film. Thaman S will be composing the tunes for the project with Rishi Punjabi’s cinematography. Sai Madhav Burra is penning the dialogues with Naveen Nooli taking care of the editing. Ram-Laxman also been roped in for the fight scenes.

Vijay Kumar BR is professionally known as Duniya Vijay as he got his first big break with the 2007 film Duniya. After acting in numerous Kannada films, this is his debut in Telugu. The actor will play the antagonist in #NBK107 and it remains to be seen what his role in the film will be like.