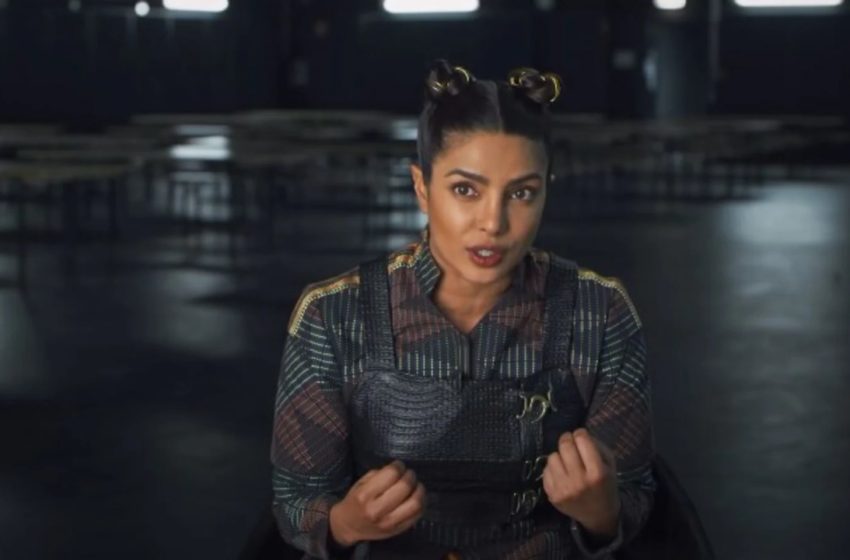 As the new kid on “The Matrix Resurrections” set, Priyanka Chopra Jonas says she initially felt intimidated by the cast from the previous movies but it turned out to be a wonderful experience to work on the film that’s led by formidable women.

The upcoming film in the popular sci-fi film franchise is written and directed by Lana Wachowski, who along with her sister Lilly had helmed the previous three titles – “The Matrix” in 1999, “The Matrix Reloaded” and “The Matrix Revolutions”, both released in 2003.

Asked about the film’s action sequences, Priyanka said though she has done stunts in many of her films in Bollywood, her character of Sati specifically did not require any physical training.

“When it comes to women, especially with ‘The Matrix Resurrections’, it’s led by extremely formidable female characters. All of them that you see, they are the ones leading the action… I think that was very important to our director Lana. It was something that really matters to her, she has spoken about,” the 39-year-old actor told PTI in a Zoom interview from Los Angeles.

“The Matrix Resurrections” brings back the original cast of the film series alongside a new set of characters. Keanu Reeves returns as Neo, Carrie-Anne Moss as Trinity and Jada Pinkett Smith as Niobe.

Yahya Abdul-Mateen II, Jessica Henwick, Christina Ricci, Neil Patrick Harris and Jonathan Groff are the new faces in the movie franchise with Priyanka, who plays the grown-up version of Sati, a child with an important connection with Neo.

Priyanka said it was an honour to be “inducted” in the film franchise, known for redefining the action and sci-fi genre with its complex story.

“It’s an extreme honour to be inducted or included in such a project and especially to be given the responsibility of the character of Sati, which I know is very close to Lana and it was very strategically placed in the previous movie. So, I was very excited when I got the role,” she said.

Recalling her first meeting with the director, the National Award winner said she took a flight to the US from India just to meet Wachowski after her agent’s call.

“I remember I was filming in India and I got a call from my agent saying, Lana wants to meet me tomorrow in San Francisco. And I got onto a flight, went straight from the airport to meet her, talk to her for a while. She asked me questions about the role and then she gave me the script and said ‘Welcome to The Matrix’ and it was really cool.”

“What was required for me was having an understanding of what happened from the time we saw her in the previous movie, and where she is right now. I worked a lot with Lana about what Sati’s purpose is right now, why she is where she is and to be able to build the adult version of where you still see the younger, Sati,” she said describing the character’s journey within the Matrix universe.

“Like the way we have even worked with the hair, we tried to give an homage to her. That was really fun because as an actor, character development is the best part about our job,” the actor, who is seen in an intriguing appearance with loose pants, knee-high boots and braided short buns, added.

“The Sky is Pink” actor said working on the movie was a “visceral” experience.”I won’t lie, as someone who’s the new kid in the movie, I was very intimidated with Carrie-Anne, Keanu and Jada Pinkett and just having the cast from the previous movies on set. But they’re so wonderful, so encouraging.

“The Matrix Resurrections” is set to be released in India by Warner Bros Pictures on December 22 in English, Hindi, Tamil and Telugu. Up next for Priyanka, who has been successfully straddling her career in India and Hollywood, is the much talked about “Citadel” series with “Avengers: Endgame” directors Anthony and Joe Russo – who are attached as producers.

Priyanka and “Game of Thrones” star Richard Madden are headlining the American version.Billed as an action-packed spy series with a compelling emotional centre, “Citadel” is executive produced by Russo Brothers along with former ABC Studios president Patrick Moran and Mike Larocca.

“‘Citadel’ will be my next project here, which is just going to be so good. I recently saw a little bit of it and I’m proud of it. It took a lot of work. We shot it during Covid. Physically it was intense, it is one of the most intense things I’ve done. But I’m very proud of it. It’ll be amazing,” she said.

In India, the actor is equally thrilled about her next film “Jee Le Zaara” with Katrina Kaif and Alia Bhatt as her co-stars.The road trip drama will be directed by Farhan Akhtar and produced by his and Ritesh Sidhwani’s Excel Entertainment, and Tiger Baby, headed by Zoya Akhtar and Reema Kagti.