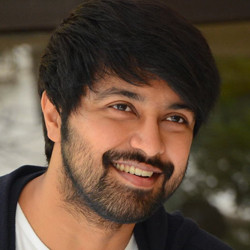 Actor Kalyaan Dhev is one of the most promising actors in Tollywood. The actor is currently busy with multiple projects, and on Thursday, another of his film was officially launched.M.Kumaraswamy Naidu will be directing the film, while Monish Pattipati will be producing it under the MP Arts banner. Kalyaan Dhev will be playing the lead role in the film.

Pictures from the launch ceremony have gone viral on social media. In these pictures, Kalyaan Dhev can be seen having a lighter moment. Tipped to be an Out and Out Commercial action Entertainer the project will go on floors in the last week of October. Reports are that Kalyaan Dhev will be undergoing complete training to play the role, and will be sporting a unique look which the fans look forward to.YS Krishna is on board as the music director.

Last seen in playing a middle-class youth in Vijetha, directed by Rakesh Sashi, Kalyaan Dhev inked a deal to act in Puli Vasu directorial Super Machi and Ramana Teja’s Kinnerasani. The teaser of Kinnerasani was released recently and has received an unparalleled response from the audience. The film will have Ann Sheetal playing the female lead. Incidentally, this will mark her debut in the Telugu film industry. Ram Talluri will be bankrolling the film under his home banner SRT Entertainments in association with Shubham Entertainments.