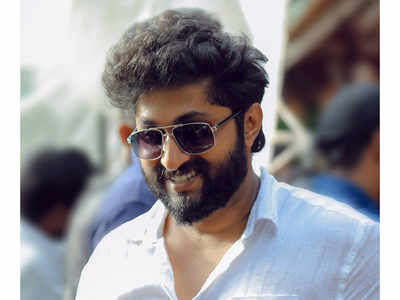 Director-actor Dhyan Sreenivasan was recently seen in an unconventional pose for the poster of his upcoming film Joy Full Enjoy, directed by Akhil Kavungal.

The poster, which has the actor curling up on his bed with the book named Mother next to him, leaves many clues about Dhyan’s character. Now, the director tells us more about the role and the film. “In the poster, Dhyan is on the bed in a foetal pose.

His character in the film, Joy, is an orphan. Joy, who lives in a villa in a city with one of his friends, is also a movie enthusiast.” As for the story, it revolves around Joy’s wish to have parents and ensuing issues, Akhil hints.

“There is a character named Jalaja, in the story. At one point, Joy gets close to her and a handful of issues erupt because of this. The film is a feel-good family drama,” he adds. Niranjana Anoop plays the leading lady in the movie.