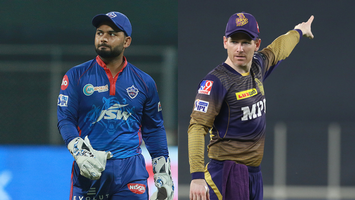 Shikhar Dhawan and Shreyas Iyer departed in quick succession as Kolkata Knight Riders (KKR) went ahead in the match against Delhi Capitals (DC) in the Indian Premier League (IPL) 2021 at the Sharjah Cricket Stadium in UAE. Dhawan was dismissed by Lockie Ferguson while Iyer was castled by Sunil Narine soon after giving a strong start to KKR as captain Eoin Morgan won the toss and opted to field first against DC. KKR made two changes, bringing in Tim Southee and Sandeep Warrier in place of Andre Russell and Prasidh Kirishna. DC replaced Prithvi Shaw with Steve Smith in the final XI. After enduring a disappointing end to a last-ball thriller against the Chennai Super Kings (CSK), KKR will look to start afresh against an in-form DC team. Despite fighting toe-to-toe against MS Dhoni’s team, KKR ended on the wrong side of the result which put them on the fourth spot in the IPL 2021 points table. DC, on the other hand, secured a comfortable win against Rajasthan Royals (RR) by 33 runs and will be looking to confirm a place in the playoffs.